Q: Do you ever see peace among all the religions?

MM: Yes, I do. It already exists. In many parts of the world, people share deep, lifelong friendships, love, and peace with people of other faiths. It drives fundamentalists crazy. We should understand that whatever divides us is misunderstanding - never superior understanding. Even the atheist with his superior scientific mind suffers from misunderstanding. But - misunderstanding is human, and disagreement is human. And feeling superior - oh, so human! Only in death, or in enlightenment - whatever comes first - do we wake up to the truth and laugh at all our notions, wrong conclusions, and interpretations - atheists as well as the religious.

Mary came to my mind the other day, in regards to peace among the religions. Here is a Jewish woman and Jesus' first teacher; who is mysteriously impregnated by someone other than her husband - a big problem in all religions when a woman "does that" - although strangly enough, the way most prophets and sons of God seem to be conceived ; who has to watch her son being crucified - far more suffering than being crucified if you are that person's mother; and whose statue is the only statue of all the statues of saints, gods and prophets (which were all stored in the Ka'ba in Mecca), that Muhammad did not destroy in 630 C.E. upon entering Mecca. Muhammad's love for Mary was very, very deep.

She could have easily been enlightened herself. The depth of her joy, her suffering and her transcendence is equal if not deeper than that of all the prophets' or apostles, yet she remained silent.

In her silence, compassion, patience, humility and example, she could unite all major faiths in the world - unless! - we start arguing about her pregnancy. That, of course, would instantly be a problem. Was she impregnated - by man, by holy ghost, or by alien - three new religions right there, over which we could keep killing each other. That would have to be the first commandment of our new world religion: "Thou shall never discuss, contemplate, speculate, or claim knowledge about Mary's pregnancy, her virginity or her sex life (Jesus had many brothers) - at all- ever!"

Even atheists could come on board. Just as a mother, just as a human being, who had to transcend human suffering, who was an expression of love, humility, compassion and trust - she could unite all of us in love. Once love and peace is found, God is found also. God is never a question of which religion, non-religion, teacher or scientist one follows - only a question of how deep one's love, one's trust, one's compassion, and one's peace is. Then God finds us. Atheists and believers alike. 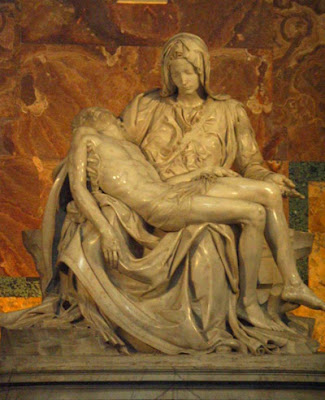