Well - in order to get this amazing dinner, which your kids are sure to blog about - you stick the uncooked noodles through an uncooked hotdog and then boil them together. But - you figured that out already, didn't you?
Posted by Mayke Beckmann Briggs at 4:17 PM No comments: 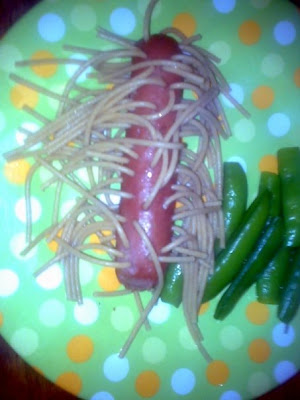 This is what can happen when fathers cook for their kids. My daughter-in-law's cousin - no doubt a genius - came up with this dinner. How did he get the spaghetti through the hot dog? This may be a patented idea. But I'll tell you in my next post.
Posted by Mayke Beckmann Briggs at 4:09 PM No comments:

Q: What can I do about being a more lovable person?
MM: Be more lovable. There is nothing to do, just be more lovable.
Q: But I feel that I am fat and ugly and that on first impression already people decide I am unlovable.
MM: There are "fat and ugly" people who are very lovable and people are instantly drawn to them. Socrates was one of them. It is all a question of what occupies your thoughts. It is only thoughts that are fat and ugly. You get rid of fat (repetitive) and ugly (negative) thoughts against yourself and others and you will be free. Freedom is very attractive to everyone. Serenity, peace, compassion... all show up even on an ugly face. They are irresistible. Become irresistible.
Posted by Mayke Beckmann Briggs at 10:06 PM No comments: 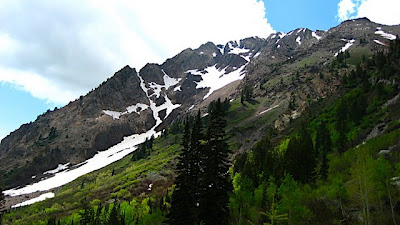 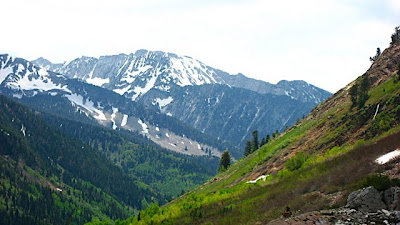 Posted by Mayke Beckmann Briggs at 9:50 PM No comments:

On The Way To Utah

Rain in Nevada driving to Utah 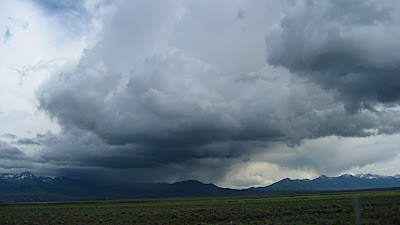 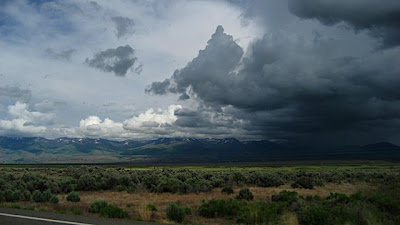 Posted by Mayke Beckmann Briggs at 9:38 PM No comments:

Our first week in Utah, I am pleasantly surprised by how nice people are here. It is a noticeable difference to California. People seem more relaxed, happy and genuinely friendly here. So many Moms with three to four children in tow in all the big grocery or department stores - the children all happily bouncing along and yet, well behaved. And the Moms - are SMILING!
We have had encounters with dozens of people this week - store clerks, government clerks, handymen, and many others - and all have this down to earth, relaxed, friendly and generous manner. I never imagined people could be happier than Californians.
Posted by Mayke Beckmann Briggs at 9:22 PM No comments:

I am getting the "White House Vegetable Garden Feeling" again today, as in: "You mean the White House didn't have a Vegetable garden?"

The same incredulous feeling is suddenly surprising me regarding today's world news about President Obama greeting the Islamic World in his opening remarks in Cairo, with a heartfelt "Salaam Alaykum" from the American People - which was followed by appreciative applause.

You mean we've been trying to help bring about peace in the Middle East without regularly greeting our Arab friends with: "Peace be upon you" - to the point that this is news? Please say it isn't so.

It seems that President Obama may be getting to the root of the problem, then.

Salaam Alaykum! May Peace Be With You - and all of us. We can work on our inner peace first - something President Obama seems to have accomplished quite nicely already. Maybe world peace is just around the corner. I dare to hope...
Posted by Mayke Beckmann Briggs at 2:45 PM No comments:

Email ThisBlogThis!Share to TwitterShare to FacebookShare to Pinterest
Labels: Islam

If your life has been boring and glum since Jack Bauer went into a coma, fear no more. You can get the same tension and stiff neck you treasure from watching 24, from watching "Whale Wars" on Animal Planet. The difference is that you can watch "Whale Wars" with your ten-year-old. It will make for spirited discussions, and might turn him into an Eco-Terrorist, so be forewarned.
As we were watching the first and second episode, and I was trying to explain the wisdom of doing things the legal way, the democratic way, and the way of least resistance - more like Greenpeace, - or Jesus and Buddha for that matter - the response I got was: "Legal or not, Mom, the other guys are KILLING innocent whales!"

It didn't help that Paul Watson had just explained that if you see someone kicking a puppy in the face, you don't just take pictures, report and wait for lawyers to deal with things, you save the puppy and deal with the attacker." Jack Bauer would be proud. But what would Jesus, and what would Obama do? As the Imam on 24 said to calm Jack: "We live in complicated times."
What Paul Watson and his team do is not - at least in episode one and two - life threatening to the whalers, and far from Jack Bauer's methods. They throw stink bombs the way we did in Middle School, jam the whaling ships' props, and do anything else annoying - and expensive to the whaling boats they can think of - to interfere with the bloody killing of the whales. It is often life threatening to his own crew, as they fight their lonely - and arguably - legal battles in the Southern Ocean - the toughest place for sailing on earth. It is almost always life saving (or at least buying a few more hours on earth) for the whales, though.

This makes for easy math for a ten-year-old.

Is Paul Watson a brave and compassionate hero, is he stupid, counter-productive, self-righteous, helping, or hurting the cause, or all of the above? That's for people who are over ten to decide.

The rest of us...are cheering for the whales.
Posted by Mayke Beckmann Briggs at 7:27 PM 1 comment: