Q: How can you be religious or spiritual without following a certain religion, teaching or moral code?

MM: By being yourself. And by trusting deeply.

Even if you are still driven by wrong motives - by being yourself and by paying very close attention you will learn and discover the truth. It is not a question of being moral or immoral, religious or non-religious, or anti-religion. It is a question of becoming more and more aware. More and more sensitive. At the highest level of sensitivity the final jump into oneness can happen.

There are many alternatives to religion in order to go beyond fear and desire . Fear and desire are at the root of all so-called evil that religions try to fight. The root of all fears and desires , in turn, is the idea that there is an "I". Realizing the illusion of this "I" simply takes great sensitivity and power of observation which can be gained through meditation, or as I said earlier - paying attention. Fundamentally meditation means paying utmost attention to the most subtle.
Posted by Mayke Beckmann Briggs at 4:07 PM No comments:

Q: If one believes in the Buddhist idea of karma, isn't trying to be compassionate in order to create good karma fundamentally selfish after all?

MM: The more one practices to cultivate a calm mind, the more one becomes oneself and the more one goes beyond dual concepts like selfishness and unselfishness, good karma and bad karma, etc. Once one is truly oneself one can neither be called selfish nor compassionate. Just like the sun which causes both skin cancer and makes our food grow - we become who we are and move beyond worry and dual concepts.

Q: That sounds like people just need to put up with us - both our negative and our positive sides.

MM: Whichever way you are, Hitler or Buddha, people either put up with you, or they don't. They do have the freedom to choose. Whether you are all negative, half negative/half positive, or all positive - people decide for their own reasons whether to put up with you or not.

To become "all positive", and infinitely compassionate, is a simple byproduct of total relaxation. Total relaxation means relaxing all fears and all desires, not just in meditation, but in everyday life.

Q: Doesn't that say one shouldn't bother to try as it requires a lot of self sacrifice. That is a selfish attitude. Don't we need to take a stand, instead of choosing an easy life?

MM: The only way to stand up to injustice and all kinds of things in the world that are wrong, and to do so effectively, is in a totally relaxed and fearless way, and without any personal desires. Jesus is a good example.

I did not say to "not bother" so one can enjoy "an easy life". I said - don't have a reason. Reasons will betray you. Wars always have reasons, peace doesn't need a reason.

( The full conversation lives at Boards.ie)
Posted by Mayke Beckmann Briggs at 11:00 AM No comments:

Email ThisBlogThis!Share to TwitterShare to FacebookShare to Pinterest
Labels: Peace 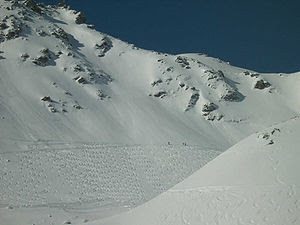 Well - my Valentine of over 35 years wished for us to make more tracks together, in a Valentine's card showing parallel tracks in a vast expanse of deep, white, powder snow, high up in the sunny mountains. It felt like getting proposed to, all over again.

My silent "Yes", far less naive than the "Yes" of my youth.

Posted by Mayke Beckmann Briggs at 3:00 PM No comments:

Email ThisBlogThis!Share to TwitterShare to FacebookShare to Pinterest
Labels: Love

Mom's Choice Award For "Here You Are"!

Here You Are won the 2009 Mom's Choice Award - as Silver Recipient in the Motivational/Inspirational category for Children's Picture Books, age 0-9. This is quite an honor.

The Mom's Choice Awards® is known for establishing the benchmark of excellence in family-friendly media, products, and services. This annual competition recognizes authors, inventors, companies, parents and others for their efforts in creating quality family-friendly media products and services. Parents, educators, retailers and the media trust the Mom's Choice Awards® for product reviews and evaluations. http://www.momschoiceawards.com
The Mom's Choice Awards® has a panel of distinguished judges who evaluate all submissions, which are judged on their own merit. The list of judges for this year’s competition include such notables as:

Dr. Letitia S. Wright, D.C., author, movie producer and host of WrightPlace TV as well as being ranked in the top 50 of the Most Influential Women in Social Media.

Evaluation Criteria: The MCA judges are "especially interested in entries that support the growth of families emotionally, physically, and spiritually, and are morally sound and promote good will.’ They also look for entries that are “inspirational and uplifting.” Parents, educators, retailers, and the media rely on the MCA’s reviews and evaluations as a trusted resource for children and families.

Here is the official announcement. If you go to this page and scroll down to ,or click on Children's Picture Books, you'll discover Here You Are on the list. Thank You!!! MCA and Thank You!!! Jet Blue Airline for inviting me to participate.

Posted by Mayke Beckmann Briggs at 5:47 PM No comments:

Email ThisBlogThis!Share to TwitterShare to FacebookShare to Pinterest
Labels: HYR

None, And All One

Q: I am raised a Christian, went through an atheist phase, then studied Hinduism, Islam and other religions. Today I mostly think of myself as a Buddhist. But, as I find out more about Buddhism and some of the things some branches of Buddhism believe in, even Buddhism is not something I can wholeheartedly embrace. I basically just meditate these days and try to find my own way. I am tempted to call myself an Atheist again, but that also feels incorrect. I neither believe that there is a God, nor that there is no God.

MM: Do not be bothered by this. It is a sign of your intelligence. Don't let Buddhism interfere with Buddhahood, or Christianity with Christ Consciousness, or Atheism with science mindedness. There is no Lovism - only Love. No Compassionism - only Compassion. No Scientism only science. No Truthism - only Truth.

What you need to question, and drop - is your need to want to identify with any "ism" , or group of believers or non-believers.

Follow your own light and be willing to stand alone! That is the only way to become one with it all. This alone-ness that is wholeness, that is holiness is who you are.
Posted by Mayke Beckmann Briggs at 12:49 PM No comments:

What qualifies for poverty in a rich country is quite different from what it actually is. If you have ever been to India, you know what a beggar actually looks like - very skinny, with no possessions, almost no clothes, often blind, crippled or disfigured by disease, desperate, and usually very humble and grateful if you give him something. And - some of them have the most amazing eyes you will ever have the good fortune to look into. You are reminded of biblical times - both by the level of poverty and the level of depth of soul in some of these "beggars".

In sharp contrast to the common picture of often plump American beggars, rolling shopping carts through town with several overstuffed garbage bags bulging over every side. In India, even the most desperate beggars have an air of lightness and freedom about them, while the American beggar looks burdened, weighed down, and tethered to his shopping cart, often angrily defending his possessions and territory. They are fighting a very hard battle.
Here is the Mercedes of shopping carts - a great and useful invention! If you have to be homeless, as many often have to by no fault of their own, it is good to be homeless in America. An Indian may look at this image and think this is a wealthy street vendor with a thriving, and fully stocked business. 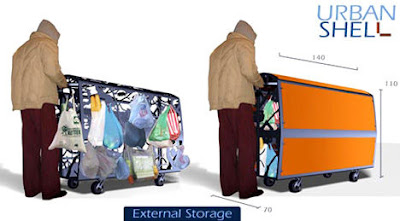 In India you are discouraged from giving money to beggars in order to end the type of business, where large organizations have their most desperate beggars out in the streets hustling for them. Beggars in India have to give most of what they collect to people who exploit them. Crying mothers with bleeding babies entice tourists into compassionate and generous giving, and children in general, are used to maximum effect. A common picture is men without legs rolling around on little wooden platforms that bump into your legs, only to have you turn around and see no one there, until you notice the hand reaching up to you from the ground.

Such a man started chasing a friend of mine at the Haridwar Train Station several years ago. Not only along the length of the whole platform, but down a flight of stairs, and back up another flight of stairs to the other platform she had to get to to catch her train. Her fear of him finally turned into anger and she turned to confront him, only to be presented in that very moment with a shy and triumphant grin - as well as her wallet - which had both her passport and $500 worth of rupees in it.

This was a wealthy man.

A 2007 map of the rich and poor in the world according to income per person.
Posted by Mayke Beckmann Briggs at 11:25 PM No comments: