Monday's MeditationMom Moment - Do You Believe In God?

Q: MeditationMom - do you - or do you not - believe in God? Some of your writing seems atheist, and sometimes it seems that you do mention God a lot.

MM: Neither, and both. You'll have to practice your Buddhist non-dualistic thinking to be happy with this answer. My writings are confusing because I respond differently to individual people . All the people who write to me are truth seekers - the religious and atheists alike. The truth everyone is intuitively looking for is "beyond belief" - literally - and already belongs to everyone. As Jesus said: "You shall know the truth, and the truth shall set you free." This freedom is all that matters.

Maybe I should ask you which God you are asking me about? 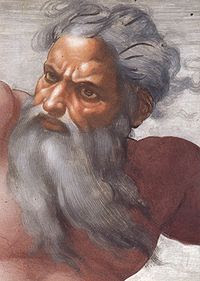 A joke on the subject: A tourist in an Irish bar asks his neighbor: "Are you a Catholic or a Protestant?" "Neither!" answers the Irish patron with some annoyance, and adds: "I am an Atheist."
After a pause the tourist asks: "Well, are you a Catholic Atheist or a Protestant Atheist?" to which the Irish man replies with a little more enthusiasm: "Actually, I am a Buddhist atheist."

God - to most people - believers and atheists alike - is an idea. Many different ideas actually, we
fight wars over. Everyone has a different idea about God - even the kind of God people don't believe in is fought over.

To others, God is a suspicion - as in "there must be something or someone greater than little old me "out there" running or overseeing things". Atheists are more mature, and brave enough to live in a chaotic and random universe. To them, God is simply a stupid, if not a dangerous and destructive idea. Most atheists just want people to stop killing each other in the name of God. Atheists though are blind too, for example, about how many people have been maimed and killed because of what they believe in - which is science.

To the devout God is a feeling - a very profound one, and anyone telling them "there is no God" is saying "you don't have that feeling". When, especially people who tell others to get in touch with their feelings, their emotions, their sexuality, as well as their "dark side", then tell those people that "their feeling" of God - their "being in touch" with the divine or the sacred in life - is not real - all hell breaks lose between these two groups.

Those who actually discover God, discover something far beyond thought or feeling, and beyond anything anyone could say anything about, and certainly something beyond belief. They usually stay silent on the subject. If they say anything they risk being misunderstood, getting crucified or stoned to death, and also risk starting yet another religion for humanity to fight over. In other words - when it comes to God or the divine - you cannot learn about it from anyone or any book, even though this can certainly be inspiring and give valuable guidance in the best of cases.

Ultimately - the whole subject of God is best avoided as it is a fight among the blind over something they are all speculating about. Believing is OK, and not believing is OK . Both can help, or be a hindrance, on the way to truth and freedom.

What is meant by God is equivalent to absolute, infinite and eternal truth, absolute, infinite and eternal freedom, love, compassion, wisdom, kindness, perfection, principle, all-one-ness that includes all opposites of good and evil, and all that is beyond all ideas. There is only one way to discover this, and that is with the deepest trust during meditation. This trust needs to be greater than the fear of death. The reason for that is that only with that, can one go beyond thought or feeling - beyond oneself - completely. "Oneself" is the blindness that prevents discovery.

When the Dalai Lama was asked what his religion is, he answered that his religion is Kindness. This is a highly scientific answer and demonstrates the insignificance of individual, personal, belief or non-belief in God, or any religious dogma.

Ramana Maharshi said it well: "No one doubts that he exists, though you may doubt the existence of God. If you find out the truth about yourself and discover your own source, this is all that is required."

In other words - God is a discovery - and unlike anything that anyone has ever believed, or not believed in.